Florence Drummond is committed to starting conversations that allow the voices ofIndigenous women in mining and resources across Australia to be heard. ...

Florence Drummond is committed to starting conversations that allow the voices of Indigenous women in mining and resources across Australia to be heard.

Indigenous Women in Mining and Resources Australia (IWIMRA) launched in 2018, shaped by the experiences of its founder Florence Drummond. Conceived to offer a platform to showcase the stories of Aboriginal and Torres Strait Islander women in the sector, its aim is to support inclusion and diversity while signposting the pathways that can guide others towards a career in the resources industry.

“The genesis for IWIMRA was my own experience working in the industry as a machine operator,” explains Drummond, who was previously employed at Rio Tinto’s Weipa bauxite operation in Queensland. “I worked in a remote location and struggled to really find opportunities to grow and progress within my career.When you’re physically isolated, you tend to feel you're not part of the innovations that are happening in the industry. So, it was important to reach out and see if there was any support, specifically for Indigenous people - but there wasn’t any. It’s what led me to start the conversation on Facebook, to make social connections and identify if anyone else was feeling the same frustrations.”

Acknowledging that there are many groups for women in mining, she instead highlights the lack of educational opportunities for Indigenous people as a further barrier to getting their voices heard. “How can we bring it back to basics with an approach that’s both comprehensible and accessible, while something that we as Indigenous women, could feel safe participating in?” Finding the answer to that question, led Drummond to a simple discovery…

“I never really understood how powerful storytelling could actually be,” she explains. “What we've found with IWIMRA is we started to share people's stories, people that I knew already in the workplace - whether they be an operator, a diesel fitter - and then with the engagement we got from social media I started reaching out to other operations people that were in the sector across the country. It’s such an amazing feeling because these women that we were bringing together, their voices, we all do share the same story and have experienced the same difficulties.” Drummond believes that uniting these Indigenous women through IWIMRA is one of several steps on the road to empowerment. 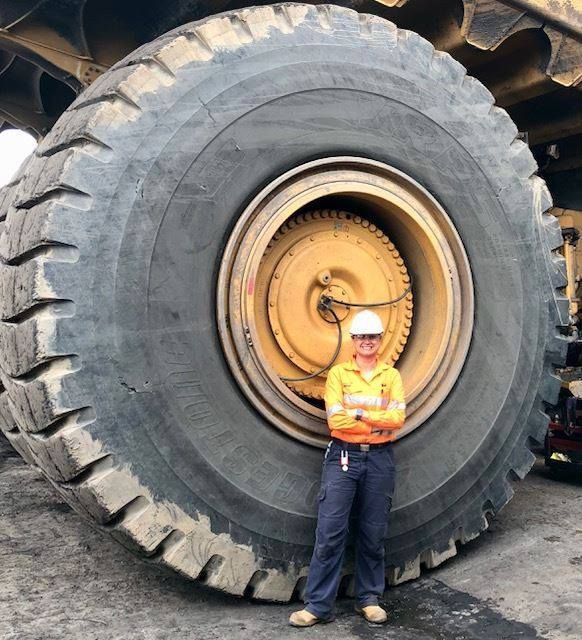 “During my time at Rio Tinto, and now at BHP (where she works as the Project Supervisor for Indigenous Engagement Strategy) they have been supportive of what I’m trying to establish,” she confirms. “I think we're all still learning, and it's great to see the initiatives that are being created. We cross section with schemes like the government’s ReconciliationAustralia with ReconciliationAction Plans (RAPs) which provides a framework to support the national reconciliation movement and create meaningful opportunities for Aboriginal and Torres Strait Islander peoples.”

Drummond maintains IWIMRA will aim to develop a solution beyond the conversations it inspires, but for now, she is still on the quest to learn more about the specific problems Indigenous women face and how best to support them. “The hurdles we have identified, like financial literacy, access to education and opportunities for progression, require the building of the right partnerships to move the situation forward,”she says. “The bulk of our women, and our Indigenous people, are in operational roles. So how do we then start to progress into those leadership and decision-making roles? Because essentially, here in Australia, all of our operations are on Aboriginal land and 60% of them are within Indigenous communities. So, we're always going to have this engagement with the conversation that we have with our RAP. Therefore, we must involve Indigenous people and their businesses. At the same time, we need to figure out a pathway into building beyond just those entry level roles in the industry.”

Drummond notes that though mining companies are starting to do great things with their inclusion & diversity initiatives in the workplace they need support from organisations like IWIMRA to contribute to the greater good more effectively. “Creating tools and problem solving together can be much more positive,” she asserts. “We need to build the capacity for Indigenous communities far beyond the workplace.”

IWIMRA’s conversation around professional development for the Indigenous workforce across Australia’s mining sector is gathering momentum with the recent MOU (memorandum of understanding) signed with the AusIMM (Australasian Institute of Mining and Metallurgy). “We’ve planted a seed,” says Drummond proudly. “It will help to offer a pathway for Indigenous people to be present at events for mining leaders and support us in our efforts to create a structure where we can start to provide practical and accessible solutions.”

Attending this year’s IMARC (International Mining and Resources Conference) in Melbourne was IWIMRA’s first international engagement and, for Drummond, confirmed they are on the right path. “We met women from Peru, Colombia, Ecuador… all over the world. To make alliances and know we all share the same story was truly heart-warming.” A passionate advocate for human rights, Drummond was thrilled to be the only Torres Strait Islander delegate from Australia at the United Nations 63rdCommission on the Status of Women in New York, attending with the support of the National Rural Women’s Coalition and the National Aboriginal and Torres Strait Islander Women’s Alliance. “It definitely gave me a clearer understanding of how much we still need to do to work towards greater visibility and getting our voice out there,” she says. “Our goal is to continue to reach out to these women and make sure we're not forgetting anyone and just saying that we're here and they're not going to be invisible. We aim to build on the international conversation and take the learning from what’s working well overseas.”

Drummond notes that the UN’s Sustainable Development Goals for 2030 are important for Australia’s mining industry but more so for the communities it operates in. “It does help to build the capacity of Indigenous women living in these communities, and support these communities through the elimination of poverty, improving the quality of sustainable living and the quality of water and energy choices. Bringing the focus back to these Indigenous communities where people are likely to stay and not leave for better opportunities, because of the cultural and spiritual connections to their homeland, is something IWIMRA wants to work with the government to support further.”

Drummond points out that the wave of innovation sweeping through the mining sector risks leaving Indigenous communities behind, either through driverless truck programmes reducing the number of jobs available or, more importantly, tech initiatives that require the kind of up-skilling that preclude communities where educational development opportunities have been lacking. “We've pretty much missed the chance already to upgrade into all these areas that are actually going to be relevant to the future,” she laments. “So, how do we build a capacity, in terms of businesses for people to then start to service the mines? This can then deliver economic empowerment and financial capability for indigenous people, and support the next generation.”

Drummond was concerned that people would see IWIMRA as “just another women’s group” but conversations she’s having with industry figures have convinced her that now, more than ever, it’s vital for communities to raise their voices. “I’ll dissolve it when it’s no longer needed,” she says. “When equality of opportunity has been delivered we’ll know our work is done. Now, I really do feel that inclusion and diversity are part of a very engaging organic conversation. So, the best that we can do as IWIMRA is to be part of these conversations and bring our presence to the decision-making process and influence that in a positive and sustainable way.”