The Running Wolf and Quartz Mountain properties lie within the Cranbrook Gold Belt (also known as the Kimberley Gold Trend), a zone that extends southwestward from the Northern Hughes Range, crossing the Rocky Mountain trench, into the western part of the Purcell Mountains.

Alluvial gold placer mining is estimated to have recovered 10 million oz of gold from streams in the East Kootenay area centred on Quartz Mountain since discovery of gold in 1864, and mining has continued since. Exploration for lode gold sources to the alluvial placers has been ongoing for a century. 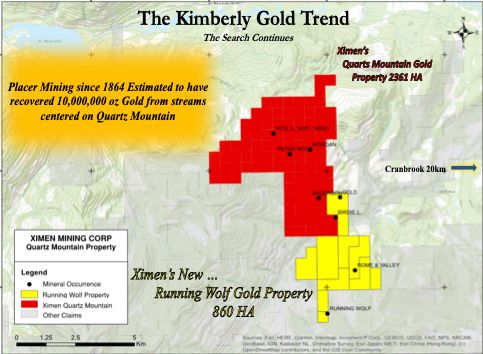 One vein has been traced 470 metres and varies in width from 0.6 to 7.6 metres. Samples of mineralized vein material are reported to have assayed from 1.08 to 19.55 grams per tonne gold. At the Running Wolf prospect, historic workings consist of five adits.