Ivanhoe mines achieved a production record in February at the Kamoa-Kakula Copper Project in the DRC. The 339,000 tonnes mined and stockpiled in February had an average ore grading of 5.5%; this included 47,300 tonnes grading 4.62% copper from the Kansoko Mine, establishing a new monthly production record at Kansoko. The overall tonnage also included 107,000 tonnes grading 9.01% copper from the high-grade centre of the Kakula Mine.

The project’s pre-production surface stockpiles now contain approximately 2.16 million tonnes of high-grade and medium-grade ore at an estimated blended average of 4.44% copper. Contained copper in the stockpiles increased by approximately 19,000 tonnes in February – a 19.2% increase over January’s production – to a cumulative total of more than 95,000 tonnes (the current copper price is approximately $9,100 a tonne).

Kamoa-Kakula is on track to have more than three million tonnes of high-grade and medium-grade ore stockpiled on surface, holding more than 125,000 tonnes of contained copper, prior to the planned start of processing in July 2021. 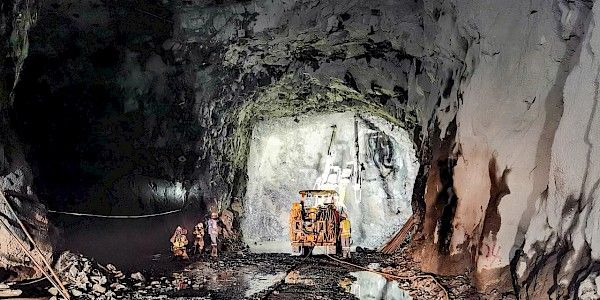 “We’ve been publicly stating for the record confidence about higher copper prices in real terms for a long time. The stars now are aligning for the start of production at Kamoa-Kakula,” said Co-Executive Chairman Robert Friedland. “We believe we’re only on the cusp of what will be a structural, powerful and long-term commodity rally given supply limitations and fundamental demand from global green initiatives.”

“The economics for pushing ahead with the Phase 3 and 4 expansions to bring the project’s mining rate to 19 Mtpa are compelling,” added Friedland. “At this expanded rate, Kamoa-Kakula will rank as the world’s second largest copper producer, with peak annual copper production of more than 800,000 tonnes. Our team has only scratched the surface on our massive, 100%-owned exploration licences in the adjoining Western Foreland region that shares virtually identical geology to Kamoa-Kakula and is the focus of an expansive exploration campaign from this year onwards.”

Ivanhoe and China’s CNMC to work together in Africa