3 Things the Mining Industry Could Learn from Kobe Bryant

The mining sector should be more like Kobe Bryant. Since his professional debut in 1996, Kobe Bryant has become the biggest figure in the NBA. His count...

The mining sector should be more like Kobe Bryant. Since his professional debut in 1996, Kobe Bryant has become the biggest figure in the NBA. His countless records speak for themselves:

But after tearing his Achilles tendon in the 2013 season (missing 76 games), many people believed the Black Mamba would never return to the player he once was. The mining industry, which is suffering from the lowest commodity prices in years, is facing the same criticism.

Here are 3 things the mining sector could learn from Kobe Bryant:

Kobe Bryant's competitive edge is 24/7. He competes all day, everyday, whether it's basketball, investment deals, pick-up games or parenting. He does not settle for mediocrity.

Bryant’s tenacity is the same tenacity mining companies should have in their operational game plans. Companies like BHP Billiton, Rio Tinto, Newmont Mining and Freeport-McMoRan need to remain aggressive no matter what the odds are.

Despite lower-than-expected gold, iron ore and coal prices, companies should continue to attack. Miners need to take charge, capitalize on the market’s weak prices, and show the industry who is boss.

A small anecdote on Kobe’s aggressive persona was recorded by Kevin Ding, a senior NBA writer for Bleach Report:

2.) Be resilient, come back from injury (weak prices) stronger

On Tuesday night, the 36-year old entered his 19th season with the Los Angeles Lakers. The superstar, who battled back from a torn Achilles tendon he suffered last year, has been plagued with major injuries through the years, putting an immense amount of wear and tear on his body. Thanks to this infographic, we can see which parts of Kobe’s body have suffered the most. 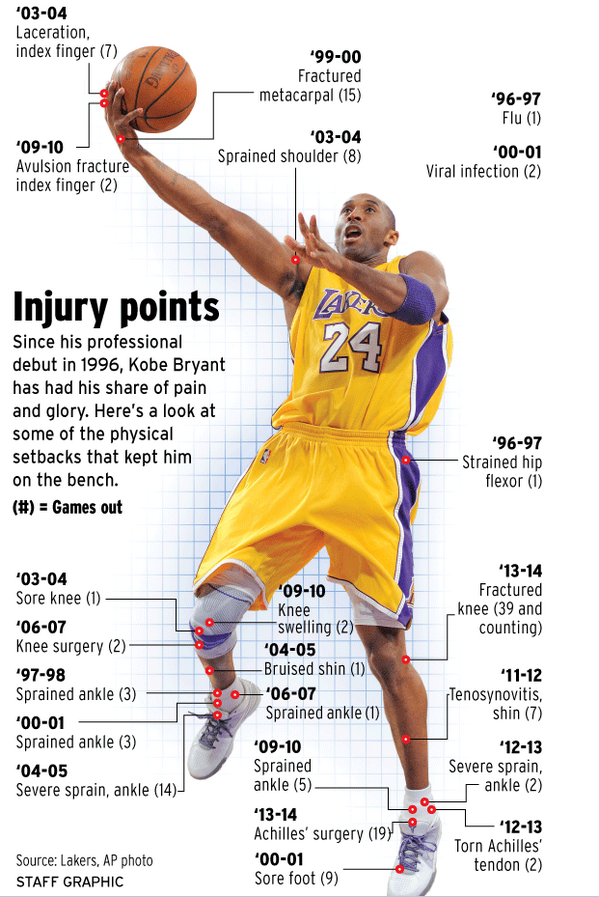 Despite the injuries, one of Bryant’s biggest attributes is his ability to be resilient. He’s shown the ability to bounce back from injury after injury, no matter what age, and succeed. Although the Lakers lost the game on Tuesday night, Bryant outshined when nobody said he could. The mining industry should do the same.

This video serves as a reminder for obstacles/failures that everyone will inevitably face. But the key is to step up, keep moving, keep fighting, and get better.

Kobe has shown us that not only are drive and focus important, but he’s also shown us that we are far greater than our challenges. Too often, we succumb to our setback and forget about our dreams, our ambitions and our goals. Yet, setbacks are merely setups for comeback. Facing a challenge doesn’t mean it’s time to throw in the towel, it means that it’s time to come back even stronger.

Like Kobe, the mining industry should be fueled by naysayers.

In an interview earlier this year, Bryant told a radio station that proving those who had a lack of faith in the Lakers and his recovery wrong is what fuels him.

"You've got to appreciate that and enjoy that and use that as fuel as motivation to basically just shut everybody the hell up," Bryant told the station. "It's that challenge, that challenge that drives us all, I think, and definitely keeps me going."

Rio Tinto, which is currently implementing the final phase of its Mine of the Future™ initiative, continues to invest. Why? Because they know the payoff will eventually hit.

Kobe Bryant has already proven himself. The five-time champion is already wealthy beyond belief, a lock to be a Hall of Famer, and a lock to be in the Top 50 players of all-time. Kobe, however, still feels like there’s something for him to prove.

Although the game of basketball and the mining industry aren't the same thing, the competitiveness is. When you look at how Kobe commits himself to succeeding; when you see how he thrives under adversity and how he pushes himself day in and day out, the mining sector could learn a lot about that type of motivation. The fire which burns inside Kobe is his drive to be the best. It’s what separates him from the rest.

The mining industry needs to be more like Kobe Bryant.