Rio Tintohas announced the discovery of one of the largestdiamondsever found in Canada, unveiling a massive 187.7 carat diamond known as The Diavik Foxf...

Rio Tinto has announced the discovery of one of the largest diamonds ever found in Canada, unveiling a massive 187.7 carat diamond known as The Diavik Foxfire.

The gem-quality rough diamond, which is now being displayed at Kensington Palace in London, was discovered in August at the Diavik Diamond Mine in the remote Northwest Territories of Canada. The diamond is the largest ever for a Rio Tinto diamond mine and the second or third largest rough diamond mined in Canada.

“We are delighted to showcase this exceptional, two billion-year-old Canadian diamond. Its ancient beginnings, together with the fortitude, finesse and innovative technology required to unearth a diamond in the challenging sub-arctic environment, make it a true miracle of nature,” said Rio Tinto Diamonds Managing Director Jean-Marc Lieberherr.

Located roughly 220km south of the Arctic Circle, the Diavik Diamond Mine is one of the largest open pit diamond mines in the world, with an annual production of six to seven million carats of diamonds. Rio Tinto, which operates the mine, owns a 60 percent interest, with Dominion Diamond Corp holding the remaining 40 percent. Last year, Rio Tinto approved a $350 million expansion at Diavik, with production starting in late 2018 and expected to continue until 2023. 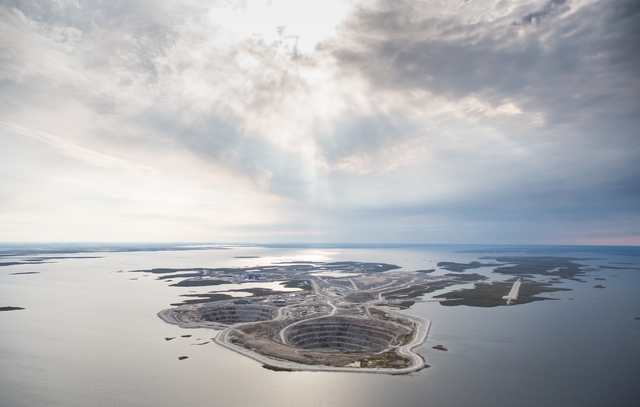 Although Rio did not estimate the gem’s value, the company does expect the stone to produce at least a 50-carat polished diamond. The world's biggest ever gem-quality diamond is the Cullinan, a 3,106-carat stone found in 1905 at the Premier mine in South Africa.