A new report has revealed how a renewable energy-powered “green” steel industry could create tens of thousands of jobs across Australia.

Grattan Institute has released a new report which details how a renewable-based steel industry could provide the answer to the future and replacement of Australia’s coal industry whilst solving the nation’s “climate policy conundrum”.

The industry has the potential to provide a solid action of the current threat of global warming with the interests of Australia’s regional communities and “carbon workers”, saving jobs in the coal industry and creating new opportunities for employment in the steel industry.

The research paper was published on Sunday and is part of a wider range of roadmaps and industry-led brainstorming sessions that have been generated to chart a renewable energy-based recovery from the current COVID-19 pandemic which has caused a major downturn in the coal industry.

The report considers and details the potential of the aviation fuel, ammonia and steel industries and how they can be utilised and transformed to help make Australia a green energy superpower. The report concludes that a near-zero emission-steel industry would be the most ideal, economic and viable opportunity.

The report states that “a range of clean energy industries could plausibly provide hundreds, or even thousands, of new jobs in Australia”. The report then continues to explain how only a few of the industries are able to “provide tens of thousands of jobs, comparable to the number in [Australia’s] key coal mining regions”, with the exception being green steel. 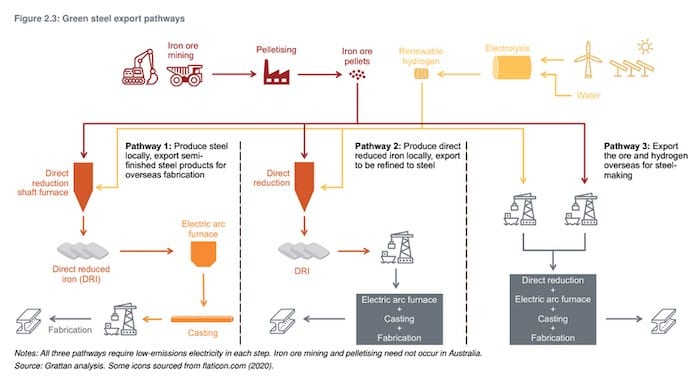 Steel manufacturing combined with the use of solar and wind power has the potential to revive the nation’s manufacturing industry and value-add renewables by using them to process export goods.

An abundance of solar and wind resources, in addition to its lower-cost green hydrogen, enables Australia to be in a better place to produce green steel rather than places such as Japan or Indonesia.

The report also explored the current global market for green steel product and export and revealed that Australia is currently cornering around the seven percent mark but also states that the nation’s government, along with international steel companies, will need to invest and show their support with immediate effect.

“Significant investment – almost $A200 billion in today’s dollars – would be required for Australia to produce almost 7 per cent of the world’s green steel,” the report says.

“This amount of investment is large, but is much less than the $350 billion invested in Australia by the oil and gas industry in the past decade alone.”

The report states that “the economic prize is substantial” and expects the annual output of a green steel industry of this size to be around $65bn, which in comparison to Australia’s export coal industry is only slightly less.

The idea would also solve some of the key failures of Australia’s climate politics, bridging the nation’s political impasse that hasn’t moved off the radar for around a decade.

Currently, Australia has almost 100,000 carbon workers, according to the Grattan Institute. “The future of Australia’s carbon-intensive industries, particularly coal mining, will be determined primarily in Beijing and New Delhi, not in Canberra,” the report states.

The report then concluded to say that “this exciting, credible opportunity for Australia will not be delivered in 2020, but it can be shaped over the next few years,” going on to say “the hard work must begin now.”

Tony Wood, Grattan Institute's Energy Program Director and Report Lead Author, went on to say “if we get this right, we will resolve the great climate conundrum that has stretched our political fabric for more than a decade.”

For more information about the mining industry, and industries such as coal and steel, check out the latest edition of Mining Global in addition to the LinkedIn page.

For more reports and insights on sustainability across the globe, check out the latest edition of Energy Digital along with the LinkedIn page.

END_OF_DOCUMENT_TOKEN_TO_BE_REPLACED

COVID-19: The days are numbered for the United States coal industry

The coal industry in the US is seeking financial support from the government following the COVID-19 pandemic which has caused a further decline in the industry.

In the past decade, the use and demand for coal has tanked amid competition from low-cost natural gas and expanded renewable energy sources. As schools and businesses have shut off during the

Hatch, Anglo American, BHP, and Fortescue have formed a Green Hydrogen Consortium to look at ways of using green hydrogen to accelerate decarbonisation within their operations globally.

BHP will set up a $50 million (AUD) Vital Resources Fund to help support regional Australian communities in its areas of operation, which are facing the significant challenge of the COVID-19 pandemic.

The establishment of the Fund follows BHP’s commitment to deliver $100 million into small, local and Indigenous businesses by accelerating payments and reducing payment